The Unlucky Adventures of Seed Harvesting

I had saved in my cafe due to some late night SpotPassing and decided to try holding a Beauty and the Beast Party as the party meter was full. Lumiere and Cogsworth finally showed up! And with Beast, no less. 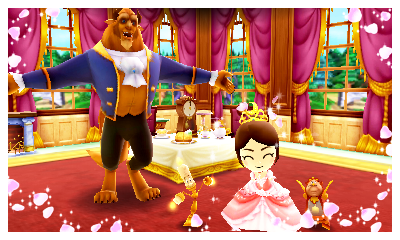 Morning requests:
-Resident wanted 2 Polkadot Tulips
-Belle wanted 3 Sweet Tomatoes. She then wanted to take a picture with me!: 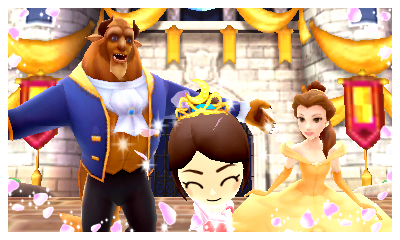 -Chip needed 1 Broken Clock Gear… Sadly, I don’t have one on me and it’s unlikely I’ll get one before I need to go out for the day 🙁
-Resident wanted 3 Crystal Plates
-Resident wanted 1 Pearl Bubble

It was then off to trade cards. I managed to get several new ones including the last Peter Pan one I needed 😀 Yay. It got me just enough for a new greeting:

“Shake Wildly”…I feel so concerned for some of these greetings.

With some last watering in the garden, that finished up the morning. More Wonderland Adventures would have to wait until tonight.

As expected, I didn’t get back until late and I spent a bit of time talking about Tomodachi Life and Disney Teddy Bears so umm… >> REGARDLESS, it was new favor time!:
-Daisy wanted a Collection Rack
-Snow White wanted 7 Robust Cloth
-Resident wanted Casual White T-Shirt and gave me the Easter Wallpaper Recipe! 😀
-Resident wanted 3 Pearl Bubbles and gave me Colorful Egg: Jagged! 😀 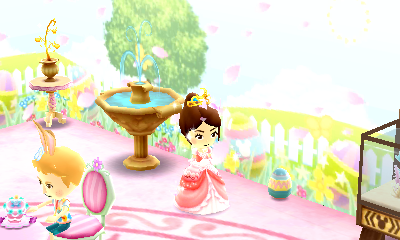 So cute T~T (Plus bonus of the wallpaper too! It’s so pretty) I just need the Flowery Egg now and then I will have all the eggs!
-Resident wanted 15 Grace Lily

I’m actually up to about 600K now in the game… This is only because all the stuff I want to make the most are things I don’t have the materials for 😛 Thus why I’m working so hard on these black rose seeds… Regardless, it was time to head to the Castle for some trading. I managed to get two new cards, though, it wasn’t enough for a new greeting. Just 21 left until 200 though!

And now, it is off to Wonderland! However, I’m going to end the entry here in the meantime. If I actually get lucky, expect a new entry (or a tweet) 😛 Otherwise, I have continued failing. The game comes out on the eShop at midnight EST so if you’re interested, be sure to keep an eye on that!

Depending on how I’m feeling/how awake I am, maybe I’ll do a late night stream–at the very least, I’ll be writing an entry about some of the DLC and online stuff as I’m super excited for it all! 😀 And if I don’t do a stream tonight, I most likely will tomorrow.