And after making my new rod, Dale wanted a picture!: 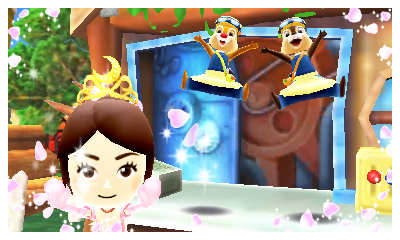 This also gets me my 74th sticker!

I then headed off to see the Chamberlain to trade some cards. I was only able to get 1 new card, but it was enough to get me my 75th sticker for collecting 100 cards! This also means I can unlock new furniture 😀 And the King had the Chancellor teach me new greetings!:

“Raise Hand” and “Hop Up and Down”

I then ran off to unlock the New Furniture. I’m sure the new Aladdin-themed Palace stuff will be helpful to get a picture with Aladdin all fancied up. I also managed to unlock more Snow White stuff and somehow still manage to not have everything for either… Although, I could have one of the things shortly at least–still nowhere close to the other though 🙁 Which I really like because it’s filled with pretty rocks. 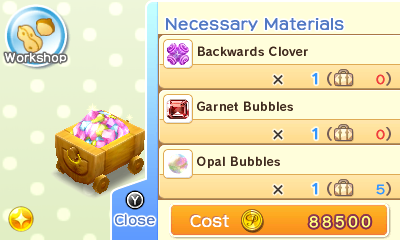 There’s also a really cute Apple Basket which I also do not have enough to make because of course I don’t T___T Right now, making things is a large mix of “I don’t have enough” or “It’s so expensive and would be all my money”–this is why I wish I was able to plan better! 😛 But yeah, don’t take your money for granted–one of the things for the Western theme costs 150K to make T~T

It was then off to check my crops for harvesting and planting. I also decided to try fishing with my new rod. 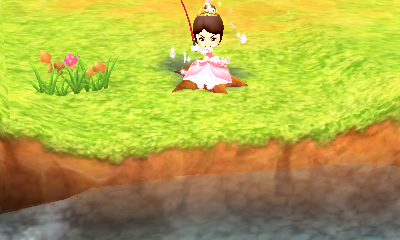 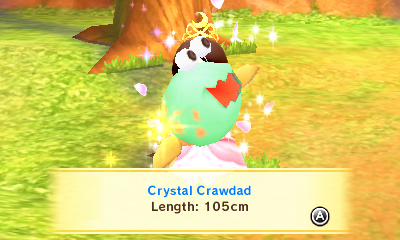 Which gets me sticker #76 😀 It seems getting larger fish is now a lot more common: 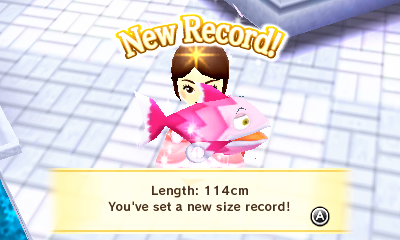 So I’m guessing I’ll need the next rod to work towards that next sticker.

I stopped by Yen Sid’s before heading to the Castleton Dungeon to see if I could make some new wands. I was able to make a better Cinderella wand and better Wonderland wand, but I’m still short on stuff for Agrabah. I also made myself a new quest outfit: 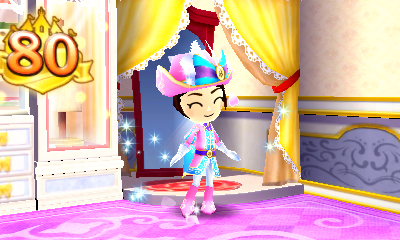 Still doesn’t beat my favorite, but it’s pink and teal and not revealing so it’s acceptable. This also gave me my 77th sticker being my 40th Ace Ensemble! Now I can unlock the chest in Yen Sid’s tower! 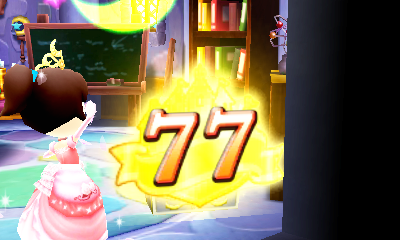 To my surprise… it contained… the credits? But there’s still another chest in his office! I STILL HAVE SO MUCH TO DO, GAME. I got to see characters in the credits before I even met them ingame. 😛 Heck, I didn’t even know Jack Skellington and Zero were in this game… 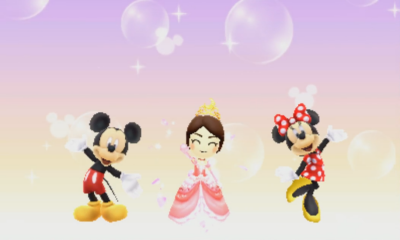 I then stopped by the Cafe to learn some dishes and get my earnings. I also put up new flooring in my Room: 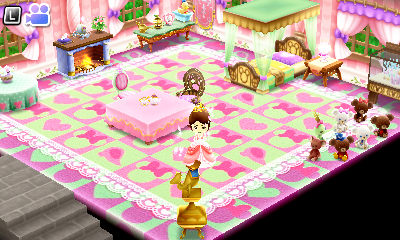 Sadly, my room is full… I’ll have to do some narrowing down eventually. I don’t believe the Cafe has a limit at least so I could put stuff I don’t like as much there. As much as I love my room though, I decided I should just remove everything for now until I can set the Cafe how I want to. It was a painful decision Roost today: 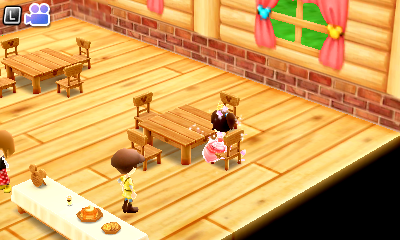 It was then time for the moment of truth… 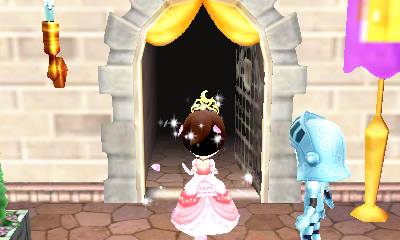 The new wand and outfit helped a lot–still not perfect, but better than my first two attempts. The second room was pretty bad at first until I realized how I could use the switched to help… I also got a secret wand recipe! Even though I wanted to attempt to go further, I figured I’d see what the second chest had first and head back. Plus, the Secret Wand could be really helpful. The second chest ended up containing 1 Unmelting Ice which is something I’ve needed for several recipes… too bad I didn’t get more. I also got a special seed (“Seed of Sprouting”) from the fishing hole so I’m looking forward to planting that!

First stop was Yen Sid and the wand is quite pretty: 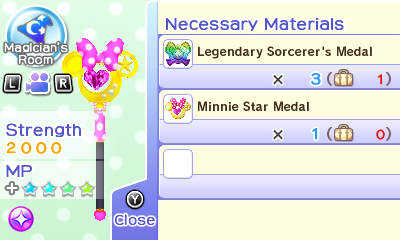 Sadly, I don’t have what I need 🙁 It would be better but oh well. The second item is from the Cafe somehow…

As for the seed, apparently it’s a flower effect! It causes crops around it to grow faster (Halves the time!). Interesting. It lasts for 4 hours. With that, it was back to the Dungeon! I went to the 3rd floor this time and despite being full of chests, it was all traps: 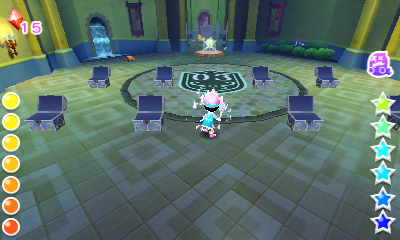 The next floor cost 75 so I’ll only be able to do one more floor… Normally I’d have stopped, but I had a Showtime Power-up and decided to go one more time. The next floor is 80 so I couldn’t go further which stinks as this current one was amazing: 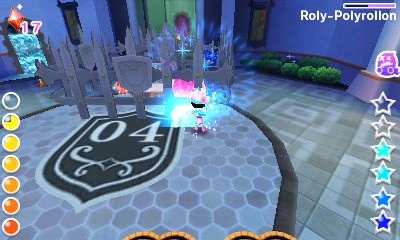 I was able to just keep doing this so they couldn’t attack me, but I could get them all down rather than summoning them all and then pulling the fence down to have to fight everything. I managed to get 2 Wooden Puppets too and more recipes so I’m super happy right now. I didn’t even have to use my Power-up and I got even more stuff in the big chest. I’m really tempted to do it again since so many items I need are from there, but maybe I should wait until I hit 80 and can do each floor…

To celebrate, I held a Beauty and the Beast party because I had pretty much everything for that. Mrs. Potts and Chip showed up! 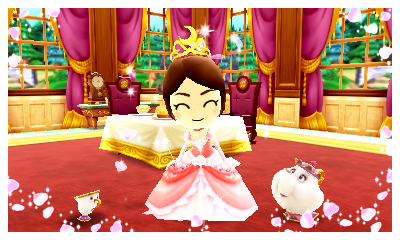 I then made some new things with the Unmelting Ice I received!

Then I went to Chip & Dale’s to see what I could make for Snow White’s theme party… I really want to get this next quest done afterall. I wasn’t able to do much, but I made the table and chair so hopefully that’ll be enough for it. Since I couldn’t go further with the Dungeon in Castleton (although, I can keep doing up to 4 floors), I decided to try and finish the Episodes in the other Worlds. 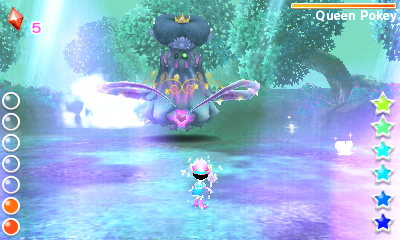 I was not prepared for a Boss rematch. That wasn’t even the end T__T AND APPARENTLY ONCE WASN’T EVIL ENOUGH: 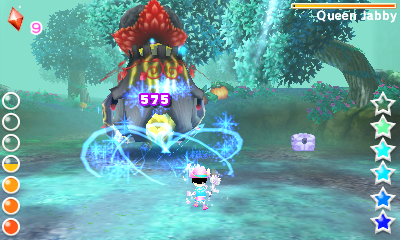 I’m officially terrified of whatever could be next in the other areas. On the bright side, I got my 78th Sticker for clearing the bonus episode T~T <3 I have all the episode stickers now! I've also now completed Cinderella's World. 5PM was just around the corner so I decided to wait before going to another area. I did stop by the cafe to make more things though: 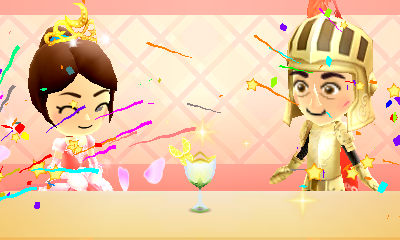 I hope I can get more Pixie Dust… On the bright side, the party meter will be full soon 😀 And then I can try and host the Snow White party!

The Evening Tasks:
-Resident wanted a Dewdrop Iris. I was able to complete this and got 2 Premium Sweetberry Seeds.
-Resident wanted 6 Bitsy Beech Logs for 2 Wooden Puppets. I immediately did this and just wished I had gotten this SOONER. It will still be helpful when I need to get more pictures with characters though and other things may use them as well.
-Resident wanted a Fluffy Dandelion for 5 Milkberry Seeds. I don’t really need them (I have plenty of both), but helped them out anyway.
-Lilo wanted a Hibiscus Swim Ring for Stitch again. I made her another one to get more of the Seashore Shellfish.
-Yen sid wanted 3 Royal Platinum Bubbles for an Eminent Sorcerer’s Medal… My rod isn’t high enough to get those yet, however…

Sadly, all cards I received were extras so it was off to go trade @-@ And Despite having much more that I need versus what I have, I only was able to get 1 new card 🙁 I also still have 2 extras lying around. I then headed back to my Cafe as the Party meter should be full and it was time to hope I may finally pass… *CROSSES FINGERS* 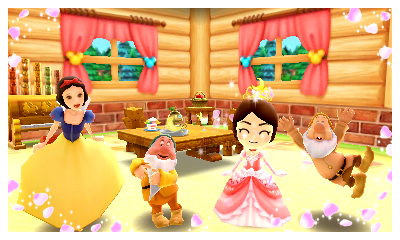 YES! And Bashful and Sneezy as well! 😀 I even got my next sticker for getting a picture with Snow White! Now I’m up to 79 <3 And my owner level is now 14! I was able to finish the next Manager Request immediately--I already made 12 varieties of sweets so that got me to 15. Next request was to try and have a Peter Pan party so that is what I'll be working on next! I need so many things though 🙁 Surprising no one, I really couldn't make anything... I had wallpaper and flooring, 2 maps, and Michael's teddy bear and already a full party meter so I figured I'd try and see what happens. I tried to do the Castleton Dungeons to get more Pixie Dust, but no luck despite several tries... Thus, I tried to get Fancy Embroidered Fabric in Cinderella's World instead. It took several goes, but I finally got it and went to make another decoration. Since I didn't have enough menu items that could work, I just made some new ones instead: 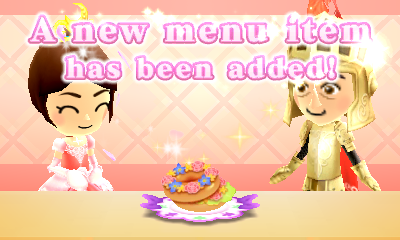 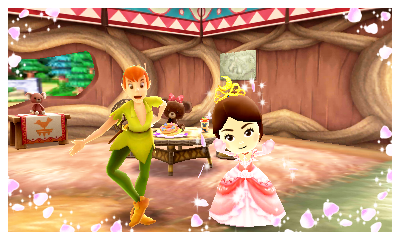 YES! 😀 And that gets me my 80th sticker! Plus another Cafe Rank <3 And another due to already making so many drinks. Next, I need to throw a Western Party... that's going to be hard x-x At least I unlocked some cute new dishes:

I then went off to see what Clothes and Furniture I unlocked.
Clothes I hope to make: Pink Magician’s Robe
Furniture: I unlocked a few neat things (like the Hercules stuff)
I also got my 81st sticker for owning 15 pairs of ears <3 I also made some Western stuff such as the Counter which took half my money... Everything is really expensive sadly :/ After another planting session... 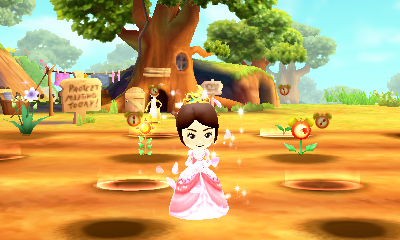 …I decided to try my luck in the Castleton Dungeons again. Then it’d be off to Wonderland for King’s Thread and Agrabah for Sand of Truth for the Western Wallpaper and Flooring.

I managed to complete it and get tons of the special stuff 😀 Plus a Super Magician’s Crown!: 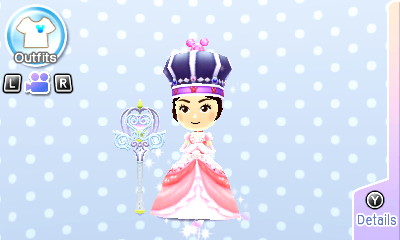 I feel so accomplished T~T And it earned me a new sticker for clearing all 5 levels!

With that done, it was off to Wonderland. 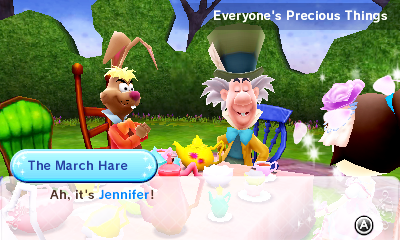 I even caught my 16th fish there for another sticker 😀 And was very happy to get it on my first go… Time for Agrabah. Unfortunately, this didn’t go nearly as well :/ I died at the boss and couldn’t continue… thankfully, I didn’t lose what I went in for and thus, the wallpaper was made as well.

No Western Tables or Chairs showed up though and I still needed something so I decided to work on the outfit >< I still need the boots and one top so off to Cinderella's World and Wonderland again 🙁 But I think that will just be it tonight @-@ Note: I received the game early from Nintendo. Thank you, Nintendo! 😀