Even though I’ve been working with the Cafe a lot and making a good amount (I had about 500K or 600K last night), the “best” items are so expensive and the best wands require the expensive combos so it’s not going as well as I’d like. I also need to work on getting more Truthstone plates which are from the last Episode in Agrabah and more of those special bubbles from each of the worlds so I think those will be my next goals. Now if I only had better luck with both (I mean, even good luck charms tend to not help much when it comes to my terrible luck).

I also want to take a moment to thank everyone who has been visiting me! (As a reminder, my cafe is Pink Sea!) I appreciate it a lot as the Nice’s help since I rarely wear Ace Ensembles and it really helps me get further with my card collection. I’m sorry if you don’t get a visit back right away–I’ve been getting so many I’ve had trouble keeping up with it T~T I’m doing my best though!

And speaking of cards… trading time! I managed to get a few new cards, but not enough for a greeting just yet.

I then went to plant some stuff, but in the process… accidentally pulled out my Sunflower 🙁 Which means I will no longer be getting rainbow honey and will have to re-get some black rose seeds to chain seeds again for that and just ugh, so annoyed with myself right now X___x

After that, I took a bit of a break as I still had a lot to do and had a late start today.

When I got back, it was already 5PM so I checked out the evening favors:
-Donald wanted a Fairy Diamond Bubble. I need so many of these I swear :/ I doubt I’ll be able to complete his request… those special bubbles just do not like me.
-Resident wanted 6 Bitsy Beech Log
-Cinderella wanted Honey
-Resident wanted Oasis Dogbane
-Resident wanted Golden Camel Handicraft

I then randomly held a Aladdin-themed party: 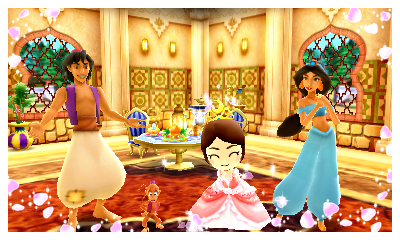 And bought a Western Chair from Scrooge’s shop: 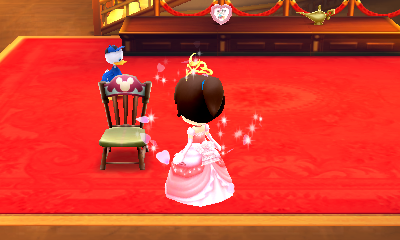 It was 120K, but I don’t believe I can get them otherwise so…

I then went off to trade the new cards I had gotten from the evening characters and more SpotPassness ^__^ I managed to get just enough to earn me a new greeting!: 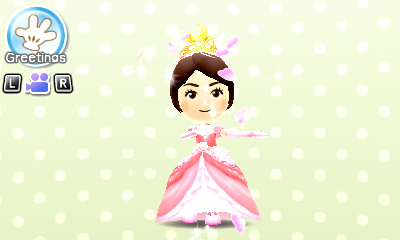 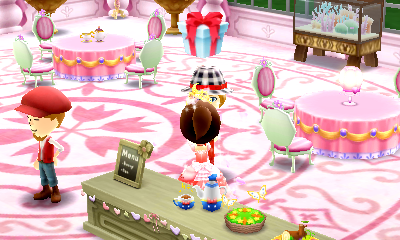 Which means now I just need the Flowery egg and I am doooone with Easter items! The wireless function really is cute: 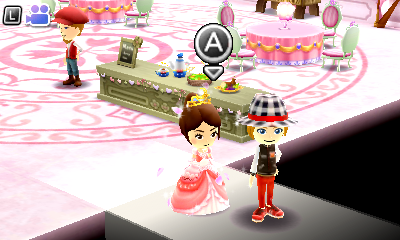 Makes me wish it could be done online too :/

Anyway… it’s time for lots of dungeoning so I’ll write again if anything good happens. I’m just… expecting it to go as bad as always 😛