This time, it’s the Pinocchio outfit! 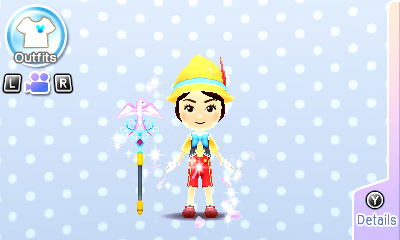 Like the first outfit, it came with two and has the hat, outfit, and shoes plus the recipe 🙂

I also held a party and Geppetto finally showed up! 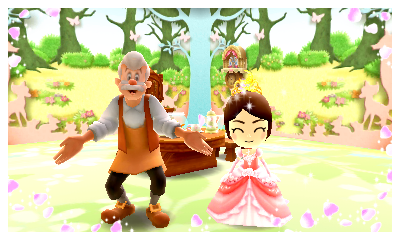 Finally, as a bonus I finally did enough favors for the Clubs Card Soldier: 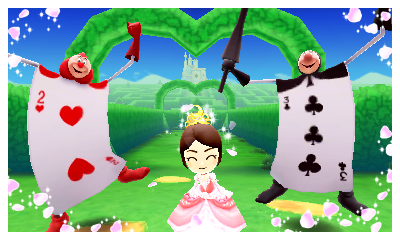 Yay for pictures 😀
I’ve had a few people ask me how different photos can be so these are the “types” so to speak:
-The character in the cafe
-The character with a photo as the reward for doing the favor
-The character asking for a photo due to having done 3+ more favors

There is also a bit of a sub-section for the last one–there’s characters that do not speak (Such as Tinkerbell, Abu and Magic Carpet, and Pluto) who will only appear with the character who can speak for them (Peter Pan, Aladdin, and Mickey respectively). When the character is with another character, you have to do 3 favors for them with that character. So think of it as favors for “Aladdin and Abu” so to speak for it to count. So for example, I have Aladdin normally, but I do not have him with anyone else–in fact, I only have Jasmine when he talks to Jasmine.

While not always the case, which character has the photo icon also can depend on where the photo is. Another example is Stitch can appear alone or with Lilo (I’ve never seen Lilo by herself out in Castleton). Stitch will take a picture with me in the throne room while Stitch and Lilo take a picture near the shop by the Popcorn Machine. The poses also vary.

In general, it’s worth it for each outcome for the different backdrops (and occasionally, poses as well).

I’m super excited as this caught me completely off guard. I wonder if getting a ! for every combo you can gives you a higher chance? As I haven’t held too many Wonderland-themed parties. But yes, when I saw Alice with a !, I pretty much cheered.

Soooo excited. Going to work even harder to get all the stuff I need for the other !’s in other themes T~T And of course, I took a photo to celebrate: 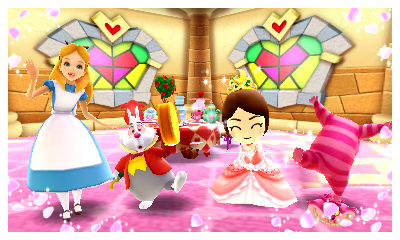 I want the Cinderella one the most, but I’m having an awful time getting what I need for it T__T

Note: I received the game early from Nintendo. Thank you, Nintendo! 😀 If you are interested in Disney Magical World, you may want to look into picking it up!

I had saved in the 100 Acre Wood last night, so first thing I did was take care of my plants and check for honey and well…

YAY 😀 That completes farming and now I am up to 94 stickers now.

It was then off to favor hunt today… I hope Pete is in Castleton and needs help T~T
-Goofy needed Denim Leaves
-Resident wanted Oasis Dogbane
-Resident wanted 3 Crystal Plates
-Donald wanted me to wear the Donald Girls’ Outfit for a photo ticket! Good thing I made it recently: 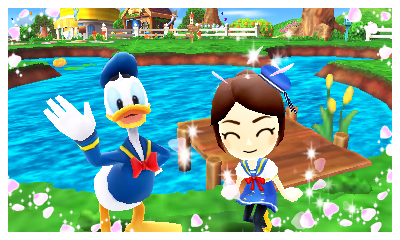 -Resident wanted 2 Popcorn.
So no Pete today T~T I did manage to get the Easter Bed at Scrooge’s though. Also picked up another Easter Basket. And I spent all my money on Abundant Coffee Seeds in Agrabah as it was the first time I had seen them.

And I had a visitor again!

I then went to go trade cards. I didn’t have much luck, but still managed to get 2 new ones and a new greeting!:

In my continued Secret Wand failure, I also made a new drink: 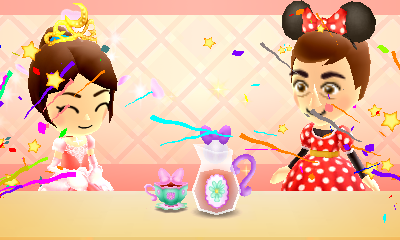 Bye Rainbow Honey T~T I shall do my best to get more. I also need to get more Royal Roses and another Starfall Radish…
T~T <3 <3 <3 <3 <3 It was then off to episodes where I was surprised by the Doorknob wanting a favor! I already did 5 for the day and had never gotten a favor in another world... He wanted 3 Teeny-Weeny Mushrooms. He wouldn't give me the recipe though 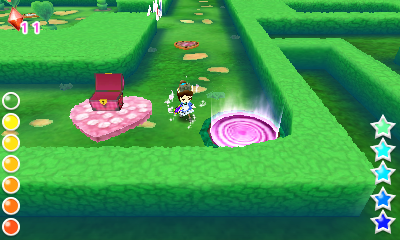 So many mazes… Considering I had to fight the boss again though, this is probably the last Episode for Wonderland… Not fond of the beat the Boss twice finales T__T Need to make sure I have the level 5 outfit for Aladdin’s world when I get to that point… I got the Unbirthday Cake recipe though from finishing! I also managed to get several rare items so I was finally able to make the Moonlight Princess dress: 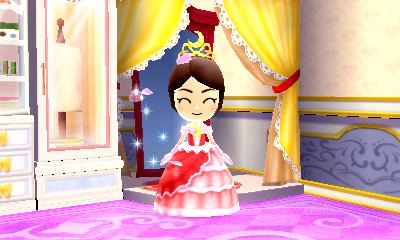 I still want to make it in Pink and White though.

Before I went to do harder Aladdin episodes, I decided to see if I could try and get a Antique Jar for some stuff plus a trumpet for one of the rare Minnie furniture items and a better wand… It took 3 tries to get the Old Antique Jar… Hopefully the trumpet goes better x-x I need at least 2 of them. After several tries, I finally managed to get one plus a new fish: 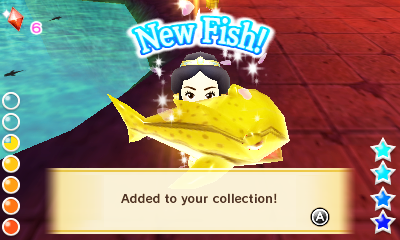 A Rich Remora. I only have 2 fish left to go now to have caught at least one of each. Still have to keep doing stuff here though to get another trumpet @-@ Plus new episodes.

Of course, I ran to Yen sid’s tower to make that new wand first. To my surprise, I was actually pretty far behind wand-wise and after finally making this one, I unlocked the recipe for the 1800 one which I already had the stuff for and thus, also made. No wonder I have such a hard time in that world. I decided to go head first into the next area before trying to get another trumpet as it contains the level 5 costumes which I feel I will need ASAP plus I am tired of wearing something so revealing
-Yen sid had the same favor as usual.
-Resident wanted Exotic Coffee

It was then off for more card trading! I managed to get a few new cards :3 Though, I’m still left with 2 duplicates. I then headed back to Agrabah and to my surprise, I was able to get both things in the next map!: 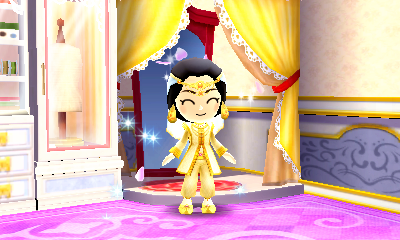 Ta-da! Still a bit revealing, but not as much as the last two… and sure, I could just wear the guy outfit, but the hats aren’t really my thing (plus they require different things and I had more for the girl stuff and I wanted the wigs). Hopefully I’ll be able to make all the best quest outfits one day… This also got me my 95th sticker for making “the ultimate quest clothes”! Yay!

I quickly ran over to Chip & Dale’s to unlock more furniture. With that, it seems I’ve unlocked all their furniture now (I unlocked all of Daisy’s clothes at 90) so the rest must be gotten from other things (like favors and stuff). I think the only thing left for me to open is Yen Sid’s Chest at 100 now… moving on, I unlocked some nice wallpaper (though, I don’t like it more than the pink Cinderella one), a cute new coffee table, the cute little Robot desk thingy, the Magic Rose Ornament (eeee T~T I need another Royal Rose though…), and a new pretty bed with is magenta-ish and canopy and beautiful but also needs royal roses and there’s so much I want and it all needs rare stuff and lots of coins
YEEEEEEEEEES. I actually hadn’t done anything different these last few times so I’m guessing you also need to have a successful themed part of their theme several times as well as the other requirements. 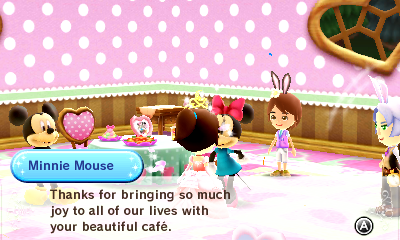 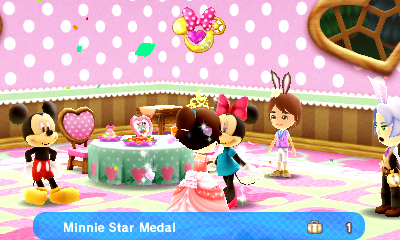 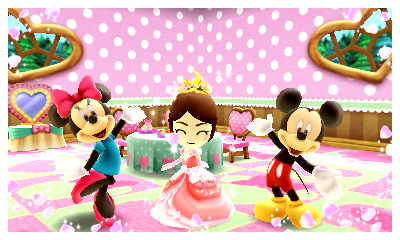 With that done, I made some new recipes: 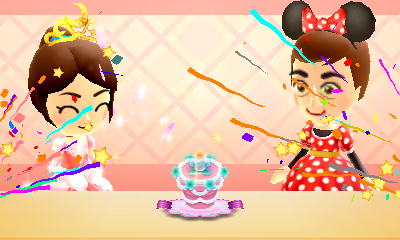 Plus, changed the cafe back to what I actually want it to look like for now… Of course, this is still in progress too as I can’t even afford/make most of what I want still… Since I can’t get Pete through the Cafe and I now have an ingredient to make a secret wand, I think I’m going to focus on actually getting stuff for my room and Cafe now more than anything. I’ll also probably work a bit on shoes as I only need 6 more for that sticker… I’ll earn the Furniture one over time just trying to get the items I want and the Card one will happen as I work on collecting everything else. Pete… I just need to hope he shows back up soon :/

For now though, I quickly ran off to go make my new wand at Yen sid’s tower though which got me my 96th sticker! 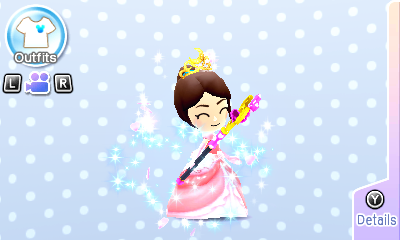 I then took a quick stop at Daisy’s shop to see what shoes I could make–if only you could sort them by price!

I managed to make exactly 6 shoes <3 Which got me my 97th sticker! (and completed the Clothing section) Woo. Now it's time to actually work on getting what I want to... But first, I think I'll finish up Aladdin's episodes. Once that is done, I'll get more of this site up so I can better keep track of what I need for what I want 😀 It was then off for the final Aladdin episode: 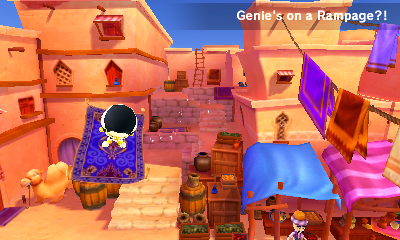 How I hate this boss… 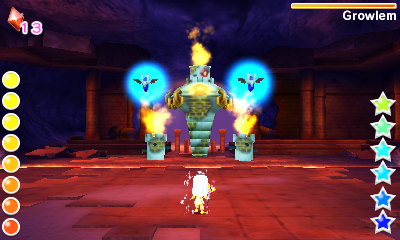 And on a slightly off-topic note (though, I did mention this game slightly recently), I ended up turning my main site into a general hobby blog where I’ll be writing about other games as well. More or less, games that don’t need a full site like this one and Animal Crossing plus other things I enjoy. So if you want to see me talk about other games, that would be a good place to check plus Twitter.

But yes, that is it for today! With that, I have completed all the episodes 😀 So starting tomorrow (or later if I play some more), I can officially start working towards my dream cafe and room! SO EXCITED <3 Sadly, I didn't manage to get any Truthstone Plates... I hope none of the stuff I really want needs them. I do need to figure out the best floor in the Castleton dungeon for Thundershock Plates though... Note: I received the game early from Nintendo. Thank you, Nintendo! 😀