So, we last left off with me still needing things from Wonderland. I wish I could say I was looking forward to it, but the enemies there are so annoying 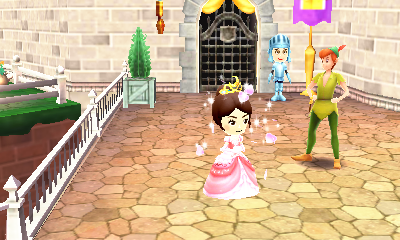 And then I made sure to visit the green blip on the map!: 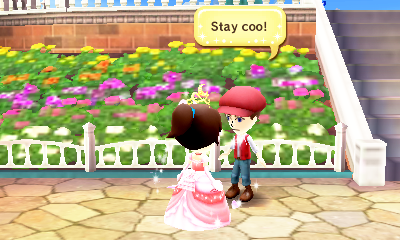 Hi 😀 Thank you for visiting, Jeff!

Since there wasn’t a time limit on the Western stuff, I decided I’d go to Aladdin’s World first to try and have some luck fishing up what Donald wanted. But first, I stopped by the Castle to trade cards. I was able to trade all my extras for a couple of new cards 😀 And the King had the Chancellor teach me a new greeting! 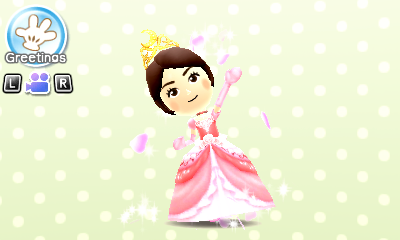 With that, it was off to Agrabah.
Fishing Attempt 1: 0 🙁
Fishing Attempt 2: 2! And I got a sticker for collecting all 12 types of Birthstones now which brings me up to 84!
Fishing Attempt 3: 1!
Yay! Thus, I ran off to Donald to finish it. I had everything to make it too so I went ahead and did so and then got my 85th sticker for making the Ultimate Fishing Rod! YAY!

At 85 stickers, I was able to unlock 10 more Recipes at Chip & Dale’s Workshop which included SO MANY THINGS I WANT TO MAKE T~T Such as:
-The prettiest wallpaper ever. I don’t know if it’ll beat what I use in my room (it doesn’t look very bedroom-y), but I definitely will be using it in my Cafe if not both.
-The prettiest flooring ever which I WILL use for both.
-A super pretty table which I have the stuff for but can’t afford yet.
-A MINI CASTLE ORNAMENT OMG 😀
-A cute ship model <3 If only there was a pink version of Cinderella's bed too... I'm actually still really indecisive on what counter I like best:

You’d think I’d be leaning towards the right one knowing me, but I really love the design on the left one–the cute pink hearts and flowers across it.

Regardless, it’s nice to start getting an idea of the Cafe I want… Unfortunately, I still need to get together the Hercules theme for the picture of Hercules (and figure out how to get a picture with Pete–I guess completing a lot of his requests? Or maybe he’ll show up in a Goofy party) not to mention doing perfect themes for pictures with other characters too… I may have that as a long term goal though and just work on that once I have Western and Hercules done… I still have a lot of saving to do for it though.

With that all set, it was off to Wonderland. I still needed to make those boots, afterall. I did make a quick stop at the cafe, however, as I realized I hadn’t been there for a while and I probably needed to make new food… I was semi-right as one of the things did sell out, but to my surprise, it suddenly said “Jeff has entered the Cafe” and well… 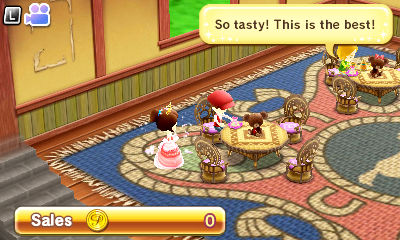 This is the first time I’ve actually had someone who visited through SpotPass sit down and eat! So cool T~T <3 It ended up taking 5 Episodes to get the 2 Clock Pieces, but finally I could make the boots. I also got lots of new seeds. 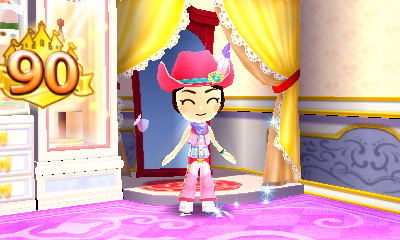 And I a new dessert at the cafe: 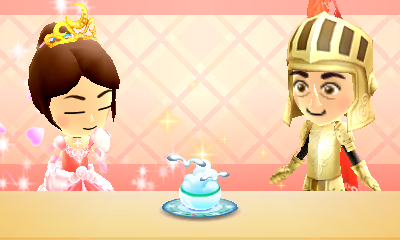 But yes, it was time to host a party and hope for the best… and unfortunately, it didn’t work 🙁 I’m not quite sure why, but I guess I’ll have to try again when the meter fills back up.

In the meantime, I decided I’d head back to Cinderella’s World to try and earn some of the things I needed for the items I plan to keep around forever. I did manage to get quite a bit from the map I did which is good so hopefully I can continue with that T~T

I also stopped by Daisy’s to make the next set of Agrabah quest clothes (so maybe I don’t get defeated) and this cute pair of ears: 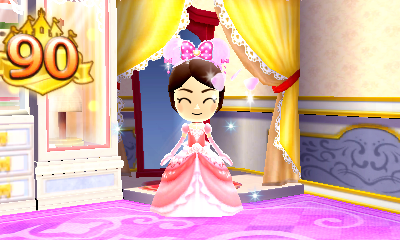 I was surprised to see I can actually make most of the Olympus’ outfits–I just need stuff for the shoes. That could be helpful when I finally get started on that theme. I might want to grab more plates too though. 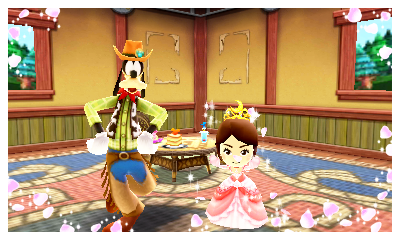 And it worked! Cowboy Goofy came to the party 😀 And my Owner Level reached 18! I now had to do a Cinderella combo with at least 6… I think I can do that. 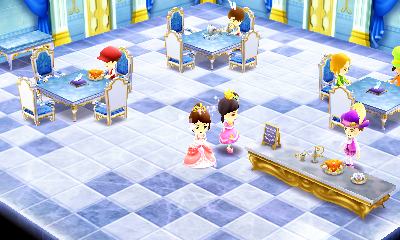 I was able to make a full 8 combo! Now I just need the party meter to fill up >< In the meantime, I decided to go fishing around town and the 100 Acre Woods to see if I could catch any new fish (or even a 180cm+ fish!). I didn't have much luck, but I had fun. And in that time, my party meter filled up! Only Cinderella showed up which I found a bit surprising (Guess it really is random how many and who) @-@ But oh well. My Owner level hit 19 😀 And I accepted the next quest which was to make 50 different dishes... which I've already done so. Thus, I hit 20 and got my 86th sticker for having my Owner Level the highest it can be! Yay! Putting new food up, I noticed I can actually make a full course of meals that are Olympus themed so if I buy the outfits or even get the wallpaper and flooring done + the meals, I'll have a 2 combo which would be enough for a party! In the meantime, I went and made a list of items I want for my Cafe when I can stop with themes (and what I'll use when I'm not working on a theme). The list is under Character. As I wandered around Castleton before getting ready to attempt the Dungeons again, I noticed Dale wanted to take a picture again! 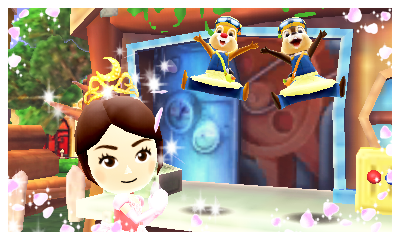 Unfortunately, I didn’t get any of the Hercules stuff in the attempts I tried 🙁 So I paused for the 5PM tasks:
-Resident wanted a Ruby Bubble for a Cloudpuff Plate.
-Resident wanted 2 Polka Dot Tulips for 1 Pink Ribbon Tape.
-Resident wanted a Teeny-Weeny Mushroom for 3 Sweetberry Seeds.
-Prince Charming wanted a Gorgeous Full Length Mirror.
-Scrooge wanted 5 Inky Bubbles for 3 Hibiscus Seeds.

Speaking of Scrooge, his store had another one of the Mini Greek Plants today! Which means I officially had a combo of two between those and the food so… I attempted a party! 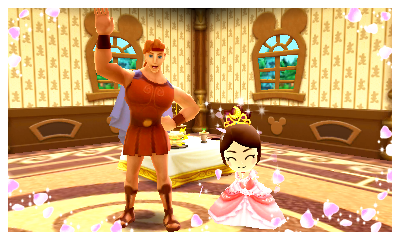 YES 😀 That gives me my 87th sticker and now the only photo I have left to get for a sticker is Pete!

I also got some new cards and was able to trade a bit too :3 Still have 2 extras though. But thanks to the new cards, I got another greeting!: 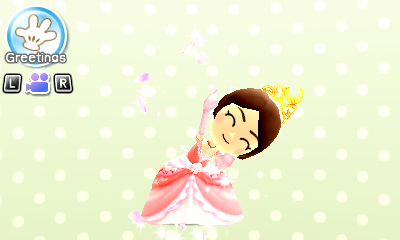 “Bend Down and Wave”

Before going back to the Dungeons and possibly doing some more Cinderella episodes, I decided to see if there were any stickers I could earn quickly. Like I was able to make one more hairstyle for my 88th one 😀 Unfortunately, the rest I either didn’t know what to do or wouldn’t be done anytime soon…

But yes, that was really it for today <3 Note: I received the game early from Nintendo. Thank you, Nintendo! 😀